Popular publishing house, Readomania, is hosting a Crime Writing Festival which will go on for the month of May. Throughout the month, every Tuesday and Thursday, Readomania’s thriller authors will feature in live Twitter discussions at 8 PM and answer your questions on everything ‘thrilling’. Featured authors: Anurag Anand, Archana Sarat, Ayan Pal, Deepti Menon, Maitrayee Sanyal De, Manjiri Prabhu, Tanushree Podder, Sourabh Mukherjee, Sutapa Basu.

I am one of the blogging partners for this festival. You can learn more about the festival here: Readomania Crime Writing Festival 2019.

The eighth session of the #ReadomaniaCrimeWritingFestival on @TwitterBooks  will be held by author Tanushree Podder (@tanushreepodder) tonight at 8 PM. Tanushree Podder is the bestselling author of thriller novels, like Decoding the Feronia Files, A Closetful of Skeletons, and Before you Breathe.

I have been a voracious reader right from my childhood. It was during the teen years that I began reading novels in the crime genre and my interest amplified. Crime books are as addicting as alcohol, I feel. Also, there is an enduring allure. For me, the idea of curling up with a good mystery is immensely satisfying. Just imagine, a cup of hot tea or coffee, a cosy nook, and a book that grips your attention; it is the ultimate luxury.

My interest in them, eventually, led me to writing crime novels. It was a challenge, actually since crime stories require substantial research, clever plotting and a deft handling of the subject.

Till date, I have written three of them and they have attracted attention both critically as well as commercially. While Decoding the Feronia Files is a thriller dealing with weather warfare, A Closetful of Skeletons and Before you Breathe fall in the detective genre.

A great crime novel requires certain essentials like a breath-taking pace, believable characters, strong protagonist, perfect setting and an element of suspense and excitement. The storyline must go through a convoluted and narrow path with umpteen twists and turns, building up tension and excitement in the reader.

Decoding the Feronia Files is a fast paced page turner with a complex plot. None of the characters in it are the gun toting kind with mean and menacing looks, nor are they perfect. Just like most of us, they are imperfect people with black and white traits. Although many of them are working in intelligence agencies of various countries, they are not supermen. Among the villains is one, who brings a smile to the lips with his failings. In fact, the character Bilal is one of my favourites in the book. He is a greedy wheeler dealer, who gets caught in a dangerous conspiracy.

The plot is a tight one, which races through several countries, carried forward by various characters from the intelligence agencies and the villains. The common thread in all this is the manipulation of weather.

It is said that truth is often stranger than fiction. There are innumerable stories of every kind in real life. My plots are mostly based on what I seen or read somewhere, albeit with a hefty dose of amplification.  The idea of writing Decoding the Feronia Files was born out of concern for the rapid changes in weather conditions. During conducting a research for another book, I had stumbled upon some news about HAARP, an organisation set up by the USA, which was believed to have caused earthquakes, droughts, storms, floods and diseases in various parts of the world.

Interest aroused, my husband and I continued researching about the phenomenon of weather control and stumbled upon a stunning lot of data. Climatic manipulations could enable derailing of economies and destabilisation of countries. Outraged by the bid to cause damage to nations by controlling weather, we embarked upon the idea of writing a book.  Many of the instances quoted in the book are real events that took place around the world.

A book on climate change can be quite a dry reading for the average reader. To make it interesting, we decided to turn it into a thriller, which would intrigue and interest the readers. Once that decision had been taken, the next thing was to outline the main plot with details about the critical twists that would carry it forward. After that we went on to create characters, flesh them out and give them back stories. 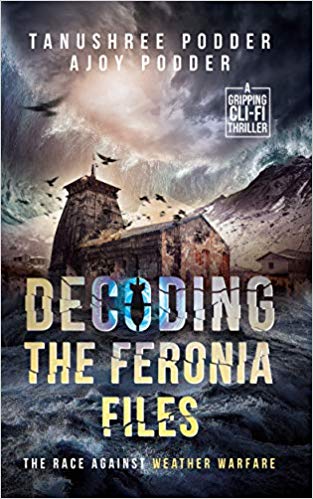 A book is a sum total of the elements you mentioned. Faltering in any one of them could result in a disaster, so I am very particular about each aspect. It does not help if one has a strong plot but weak characters. Each element has an impact on the final story. The setting and imagery have to be perfect, the plot tight and racy, red herrings have to be scattered judiciously and action spaced out. While these are true for any kind of fiction, their importance in crime novels can’t be undermined. The setting should be described in such a manner as to make it easy for the reader to visualise. This is where imagery helps. The characters have to be believable, of course.

It’s only in movies that one finds villains with maniacal laughter and exaggerated mannerisms.  Real life criminals are nothing like them. They do not stand out and call for attention. A murderer could be a socially popular and likeable person. In fact, many of them are quite charming.  If you recall the Sheena Bora murder case, the culprit is a one such person.  Can anyone imagine Indrani Mukerjea as a murderess? She is just as normal looking as anyone else.  Yet, killing one’s child is perhaps the most horrific of crimes. Think about any crime and the person associated with it and one will realise that there is nothing that sets them apart from the others.

To create a believable character capable of horrific crime, one has to determinedly avoid making a caricature out of him, and that is what I attempt to do.

Twists and turns are the nuts and bolts in crime novels. Without them the story is sure to fall apart. Let’s face it, readers who love reading crime fiction are the adventurous kind. They are looking for action, and suspense. They want adrenaline pumpers. It is the complex, multi-layered stories with diverse characters, and exciting twists and turns that holds their attention.

I have been an avid reader right from the time I learnt reading. Whether it was the Enid Blyton books, initially, or the complex ones later, I have enjoyed every bit of my reading journey. It was during my early teens that I got hooked to crime fiction and found my dose of excitement in Perry Mason, Hadley Chase, Hercule Poirot and Sherlock Holmes books. There are so many excellent crime writers that it’s impossible to list just a few. Having said that, some of my favourite crime fiction writers are Agatha Christie, Dorothy Sayers, Mary Higgins Clark, Ruth Rendell, PD James and Sue Grafton. It’s sad that most of us do not read Indian crime fiction writers. I have read almost all stories penned by Satyajit Ray and Sharadindu Bandyopadhyay, and their protagonist Feluda and Byomkesh Bakshi are all time favourites.

While it helps to know the craft of writing, it is not a must. The older generation of writers wrote great stories that came straight from their hearts. They neither studied the technicalities nor bothered about the grids and graphs. I belong to the old school. I have not gone through any courses, nor know much about the technicalities of writing. I don’t have a set method, nor do I plan my path in details. I am a whimsical and spontaneous writer, which helps since I keep changing the end or sub plots as the main plot progresses. I may begin with one premise and land up finishing with a totally different one. It is important to trust one’s instincts rather than stick to a rigid path, that’s my belief.

Trends change. What works today may not work tomorrow. Also, one should follow one’s heart while writing. Writing requires knowledge as well as love for the subject. I will never attempt writing mythology although it is quite popular currently. Simply because I lack the vast knowledge it would require. In fact, following the trend could be quite disastrous.

The importance of reading can’t be ignored if one wants to be a writer. I would say a person should read a hundred books before he thinks of embarking on a career in writing. Of course, there are no hard and fast rules or set patterns where writing is concerned. What works for me may not always work for someone else. Having said that, I will reiterate that there are no right or wrong ways to write. Dive into the task with your heart and soul. That’s the only trick.

Follow V i a k a t on WordPress.com